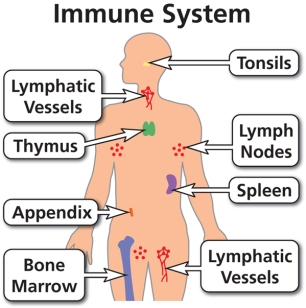 The immune system is the body’s form of defense. It is comprised of organs, tissues, and cell products that all work together to fight harmful substances such as pathogens that cause infection and disease. The ability to fight off illness and disease depends on several factors, but the way one reacts to stress, and the health of the immune system are things that can be influenced. The brain and the immune system are in constant communication. The balance between the two is very delicate, but can be disrupted by any kind of stress. (Bryant). “The psychosocial state of a person can have direct impacts on the immune system.” (Mayoclinic). According to Hansen, there are two main ways that stress has a direct, negative effect on the immune system including:

With prolonged stress, the body may develop a resistance to cortisol, and does not respond to it properly if it is present in the blood for long periods. Instead, it ramps up a production of substances that actually promote inflammation leading to a state of chronic inflammation. (Hansen). The white blood cells, or leukocytes, which are the main fighter cells of the immune defense system, are made up of classes including: natural (NK) killer, lymphocytes, monocytes, and granulocytes. Each type of cell has its own functions. 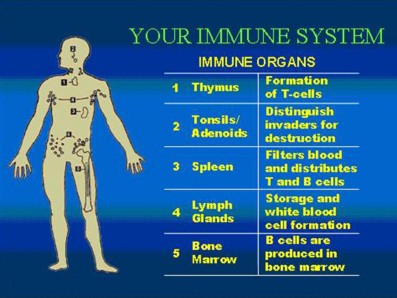 Natural Killer (NK) cells are just as the name suggests, and part of the first line of defense against virus infected and cancer cells. (MedicineNet.com). According to mind-body-health.net, it is known that stress can suppress the immune system, through the action of adrenaline and cortisol, recent research shows the HPA axis can actually have a positive effect on the immune system, reversing the effects of cortisol and increasing the killing ability of natural killer (NK) cells. (1).

Lymphocytes are cells that help regulate the body’s immune system and is subdivided into B-cells, T-cells, and natural killer cells. B-cells are responsible for the production and secretion of antibodies that help identify and fight infections in the body. T-cells are responsible for making close and direct contact with the antigen. (Mayoclinic). When a person experiences prolonged stress, the body needs those T-cells and white blood cells, and unfortunately cortisol continues to suppress them, thus weakening the immune system over time. (Calmclinic). In a healthy immune system, white blood cells gather at an infected or injured site in the body and produce substances that help fight off the infection. In a person with lupus, both B-cells and T-cells can become overactive. The two main consequences of this altered white blood cell activity are the production of autoantibodies and inflammation. (Petri MD).

Monocytes mark cells that need to be destroyed by lymphocytes, and are able to consume, or ‘munch,’ on harmful bacteria, fungi and viruses. Then enzymes in the monocyte’s body kill and break down the germs into pieces. (Study.com)

Granulocytes are able to ingest foreign parasites. During stress, the release of cortisol causes a shift from a cell based immunity to an antibody response. This shift to the antibody response results in a poorer ability to fight viral infections, and increased susceptibility to allergies. (MBH.net).

Can these autoantibodies be the result of one’s “trigger” and poor coping habits? “Inhibition of emotions could be another stress factor negatively affecting health. Bottling up negative emotions seems to tie up resources of the immune system.” (Beaton). Going back to understanding lupus, autoimmune, again means the immune system cannot tell the difference between an invader they should attack, and the healthy tissues to leave alone. Could the immune system be attacking healthy tissue due to the chain of events from one’s unresolved emotional pain and stress? The body was not designed to operate continuously in a hyper-arousal mode. In the case of Chakeria, her body was trying to tell her that how she dealt with fear was not beneficial to her well-being. Her continued fear and hyper arousal came with negative consequences.
If the statistics of lupus are tied with this theory, generally boys externalize the effects of trauma, while girls internalize them. Women are also more prone to rumination which hold components of upset, anger, and depression. Women are more prone to being diagnosed with lupus and depression than men. Internalizing the effects of trauma leads to depression, and depression in turn lowers the immune system functionality. The races of these women with a higher chance of being diagnosed with lupus tend to have a higher chance of growing up in a home where children may be exposed to emotional trauma and/or have lower income levels. The age range may depend on how a person copes with fear once it has been triggered again. “Our emotional states can lead to physical ailments, possibly indicating that we are going through a difficult time in which negative thoughts and emotions have taken control. Feelings of sadness can greatly influence our energy levels and motivation. Sadness causes fatigue, excessive tiredness, and low energy.” (steptohealth). Severe fatigue, excessive tiredness, and low energy are all symptoms as lupus and adrenal fatigue as well. “Excessive negative emotions, like calories, build up over time. You may be able to burn some of them off, but after a while, they build up to a point where you’re feeling sluggish, low energy, and disconnected.” (Kennedy). Harvesting ill feelings come at a cost, and may result in disease if left unacknowledged. A traumatic event, leaves room for unacknowledged emotions and increases the chances of a person reliving the event as well as chronic stress. Fear takes over thoughts and emotions and may lead to stressing. Stress suppresses functions and body systems that are actually needed, leading to lower immunity and susceptibility to other possible complications or illnesses. Cortisol in the blood has many effects, and leads to infections and disease. The impact of fear directly affects the kidney which is typically the organ affected most by lupus patients. Lupus stems from “fear” along with many other factors.

Emotions are no more than messages sent by the subconscious mind in order to notify a person about something. When one falls ill, the body is saying “pay attention.” It is vital to understand subconscious communication to the conscious mind. Why is clinical psychology overlooked instead of being as big and promoted as going to see a primary care physician? A person must be mindful of the type of thoughts that are put into the heart, and fill the mind. There is a difference health wise with tweaking one’s perspective. I.e.: “Nobody loves me,” to “I am a loveable person.” I believe there is no physical ailment without a mental or emotional disruption first. I am not proposing if a person needs to deliver a baby, or breaks a bone a clinical psychologist can heal them. I am stating medical doctors and health psychologists need to be a closer team to heal the body in whole. Health psychology principles and cognitive behavioral therapies continue to be overlooked by the general population and the medical profession. These methods require the physician to be aware of other successful treatment regimens. Health psychology requires individuals to make a commitment to take responsibility for their own physical and emotional health. Until health psychology principles are accepted by the medical community and until the client begins to follow these principles, the emotional and physical condition will continue to ravage the mind and body. (MacDonald).

0 thoughts on “Understanding the Immune System”